And so today, we did miss the first run. The boys went out early again and got in a much shorter line this morning. Things started to thin out today and will quickly do so tomorrow until Friday. Many teams don’t stay the whole time, a lot blow up engines or simply break things that can’t be fixed in the middle of a dry salt lake. Some just come to set records and leave as soon as they do, it really varies, especially depending how far you’ve come. If you’ve come a long way, such as us, you stick it out until the end and make good use of the time that will be forthcoming. Either way, I’m hoping the three hour lines are long gone.

The first run for today came in at 165.397. I feel like he’s trying to win a prize for the most runs with the closest times, if so, we are in the running for it. It was another clean run but as with so many of the other teams, it’s a head scratcher trying to come up with a solution to make it go faster. They’ve talked to many other teams that have run identical to what they have here now or even more horse power than what they have previously and they are ending up going slower. The thought is that the rolling resistance of the salt is different this time which is holding them back. Based on this theory, we may never know this year is she will go any faster but we’ll keep trying. 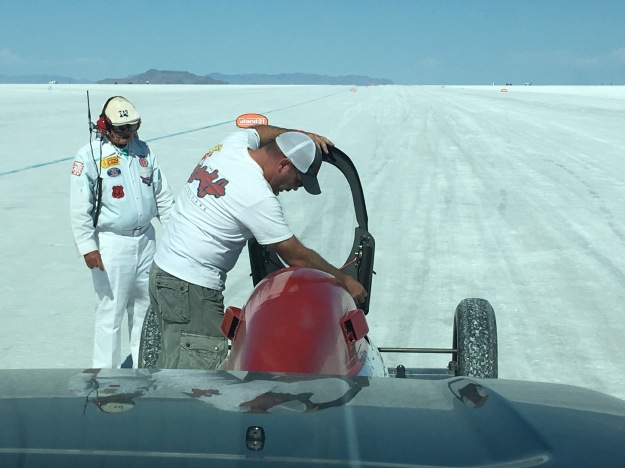 For the second run of the day, Andy decided to switch back to regular pump gas to see if it would make any difference. It worked okay before and he wanted to see if that would change the outcome in our favor this time. And the time was…..164.837. So, no. No difference to the pump gas from that expensive race gas! I told Cale we should take it home and use it in his pulling tractor and see how well it works. He might be the fastest one around!

By the time we were done with the second run, the short course we were on had no line and you could hot lap if your car was ready. That’s how it will start to get tomorrow as well and they will also shut down the rookie course. The heat is just taking a toll on everyone. Our pit neighbor didn’t even bother after his morning run. He said he really underestimated how hot, hot really was. It’s in the nineties with low humidity but so many days of it is taking a toll on the vehicles and the crew.

On that note, what do you do with a toddler on the salt? I’d have to say this was probably a first at Speed Week. Why not, we brought everything else! I certainly think she’s been having a good time with everyone. 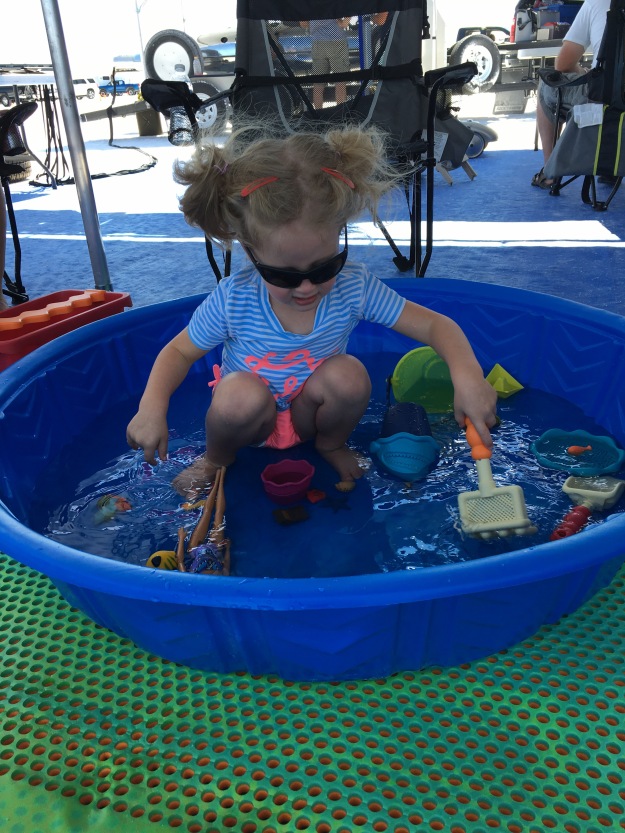 As for the quote of the day, I am seeing a trend starting. Anytime a vehicle is started, someone should be inside in case something would happen. Brock has been hopping in the tank when this needs to be done. Apparently he got in it today, “Man, it really stinks in here. Oh, wait, I think that’s me.” I told you it was hot!