It is time to put an end to this trip which began almost three weeks ago. Our 2016 adventure to Bonneville will not easily be forgotten. Each of us will take away our own perspective of the trip as anyone does when they go anywhere. This is just a huge endeavor that most people I know don’t quite understand. It takes months to prepare for and isn’t really anywhere anyone would “vacation”. I agree!

By the end of this trip we will have traveled through 13 states, gone over 5,000 miles, reached a height of over 10,000 feet, stayed in ten different hotels, killed one billion bugs with our trucks and averaged just over 10 miles to the gallon. One truck used roughly 540 gallons of fuel so it’s a good thing the price was down right now. And yes, that’s the crappy mileage you get pulling a 9′ high trailer behind you. Seems like we could just cut that down to save on all that drag since the belly tank is not quite 4′ tall? Just a thought.

We weren’t sure how this trip would go having a two year old with us. I have to say, she probably did the best out of all of us. She’s upset we aren’t staying in anymore hotels and traveled better than I could ever have expected. Luckily, she is a Welker at heart and the loud cars didn’t bother her and she liked driving around in the bug. Who would have thought? I do believe she is going to have withdrawal from not seeing her cousins Caley and Brockey as she has started to call them. I think it may go the other way as well.

The last quote does go to Cora for this trip. When putting in a new dvd for her, I disconnected the charging cable momentarily and she told me, “I will hold it and I promise, I will not put it in my nose.” Ah, from the mouths of babes. I was happy to hear that.

I want to thank everyone for following along, whether it’s your first time or you have continued from before. We really only started this for family so we didn’t have to make a lot of calls with updates how the car was running. We found out when we got home the last time that it grew quite a bit larger than just family that was interested. People I didn’t even know came up to us saying they had followed along. I appreciate all the nice comments in regard to the writing as well. Like I said before, I don’t know much about the cars but I can try to make you feel like you are there.

Thanks again. This is all done from Andy’s desire for speed. Deep down, a lot of people have their own inner desire, he is just lucky enough to have been able to see it come to fruition and experience driving at 168.8 mph. Pretty cool!

Please check back for updates. As we get home and have time after cleaning everything, we will post more photos and videos.

(Feel free to hit us up for t-shirts, we still have a bunch to sell) 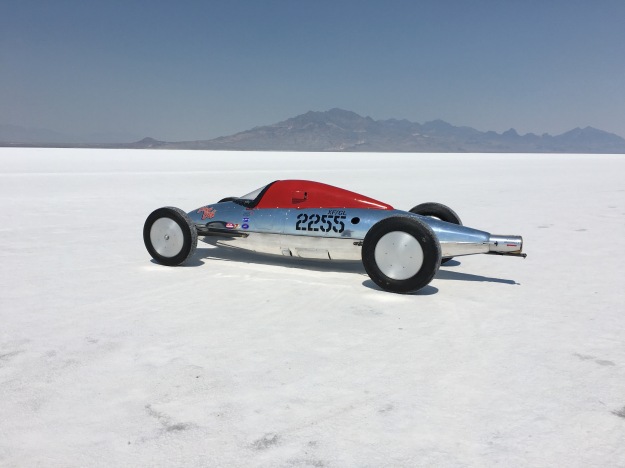 4 thoughts on “The Finish Line”